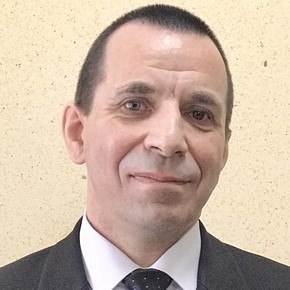 Sergey Britvin was born in 1965 in the city of Belovo (Kemerovo Region). In his childhood he took a great interest in gymnastics and other sports. By profession Sergey is a crane operator and driver, he drove heavy mining equipment. Currently, he has group II disability.

In 1992 Sergey got married; in 1995 he began to study the Bible because he was interested in the doctrine of a global resurrection of the dead. Years later his wife Natalya became interested in the Bible. She was especially touched by the positive effect faith had on her husband.

Sergey’s daughter, son-in-law, grandson, brothers and sister, who do not share his religious beliefs, are shocked by what has happened to him. His son-in-law is amazed that people are arrested only because they peacefully study the Bible at home.

Levchuk Vadim
Левчук Вадим
Номер уголовного дела:
11807320001000380
В чем подозревается:
according to the investigation he participated in religious services, which is interpreted as participation in the activity of an extremist organisation (with reference to the decision of the Russian Supreme Court on the liquidation of all 396 registered organisations of Jehovah’s Witnesses)
Регион:
Kemerovo Region
Номер дела в суде:
1-139/2019
Расследует:
Investigative Department of the Directorate of the FSB of Russia for the Kemerovo Region
Населенный пункт:
Beryozovsky
Текущая стадия дела:
приговор вступил в силу
Возбуждено:
19 July 2018
Суд:
Берёзовский городской суд Кемеровской области