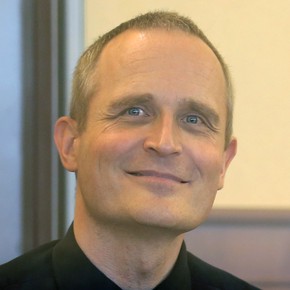 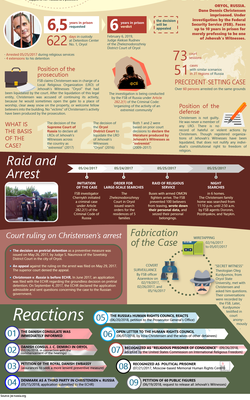 Dennis Christensen was born in Copenhagen (Denmark) in 1972 to a family professing the religion of Jehovah’s Witnesses. Dennis has a younger sister, Maybritt, with whom he has had close relationship since childhood. In 1989 Dennis took a conscious decision to get baptised and become one of Jehovah’s Witnesses.

In 1991 he finished carpenter courses; in 1993 he received a diploma as a construction technician from the Technical School of the city of Haslev (Denmark). Since the age of 19, Dennis has lived apart from his parents and provided for himself. In 1995 Dennis arrived in St. Petersburg as a volunteer to help in the construction of the branch office of Jehovah’s Witnesses in Solnechnoye. He came to love Russia, and in 1999 he moved to live in the city of Murmansk. There he met his future wife, Irina, who recently had become one of Jehovah’s Witnesses. They married in 2002, and in 2006 they decided to move further south, to the city of Oryol.

In Oryol Dennis worked as an individual entrepreneur, offering his services as a builder and master of interior renovations. Not having children of his own, Dennis enthusiastically engaged in improving the children’s playground in the courtyard of his building on ul. Priborostroitelnaya. Dennis and Irina Christensen have a good relationship with their neighbours.

Read full text in Russian
Номер уголовного дела:
11707540001500164
В чем подозревается:
according to the investigation, together with the others he conducted religious services, which is interpreted as “organising the activity of an extremist organisation” (with reference to the court’s decision on the liquidation of the local organisation of Jehovah’s Witnesses)
Регион:
Oryol Region
Расследует:
Investigative Department of the Directorate of the FSB of Russia for the Oryol Region
Населенный пункт:
Oryol
Текущая стадия дела:
приговор вступил в силу
Возбуждено:
23 May 2017
Number of the case in court:
1-37/1
Considering on the merits:
Zheleznodorozhnyy District Court of the City of Oryol
Judge:
Aleksei Nikolaevich Rudnev
Appellate Court:
Oryol Regional Court
Черновик письма был создан в вашем почтовом приложении. Если он автоматически не открылся, перейдите в него.