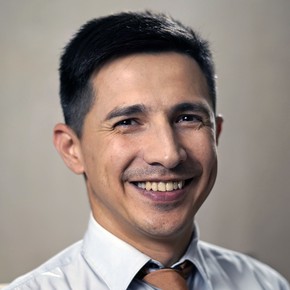 Feliks Makhammadiyev was born in 1984 in the city of Karshi (Uzbekistan) to a family of law enforcement officials. Since childhood Feliks has loved to draw, write poetry and songs and to do programming. In his youth he was seriously involved in sports and performed in the KVN comedy competition. He worked as a hairdresser for many years, conducted seminars on hairdressing and was a manager of a hairdressing salon.

Feliks’s parents divorced early on; in 2002 he moved with his mom to Saratov. There Feliks became acquainted with Bible teachings. His was very interested to learn that God wants to put an end to wickedness and injustice. In 2011, he married Yevgeniya, who shares his love for painting. They also study foreign languages and participate in cycling trips.

Feliks’s relatives and friends, even those who do not share his Christian beliefs, are shocked by the fact that such a meek man is labelled as an extremist. They hope that very soon there will be a positive outcome to the case in court.

Miretskiy Aleksey
Мирецкий Алексей
Номер уголовного дела:
11807630001000037
В чем подозревается:
according to the investigation, together with others he conducted religious services, which is interpreted as “organising the activity of an extremist organisation” (with reference to the decision of the Russian Supreme Court on the liquidation of all 396 registered organisations of Jehovah’s Witnesses)
Регион:
Saratov Region
Номер дела в суде:
1-333/2019
Расследует:
Investigative Department of the Directorate of the FSB of Russia for the Saratov Region
Населенный пункт:
Saratov
Текущая стадия дела:
приговор вступил в силу
Возбуждено:
9 June 2018